After banknotes, it is now the time of new coins in India. Yes, Prime Minister Narendra Modi has changed the entire face of metal coins we hold, by introducing new Re 1, Rs 2, Rs 5, Rs 10. But what was interesting is that, even soon new Rs 20 coins will be part of legal currency and circulated in the country across. Such back-to-back change in Indian currency chest has taken place since demonetisation drive, which was a gateway. But take note that, the existing coins will also remain a legal tender. However, considering there are so many different coins in India, it does create the possibility for fake ones as well. Last year, a buzz took round about how a gang fooled people with fake coins which valued up to Rs 50 crore. In fact, many news agencies have reported about Rs 5 and Rs 10 fake coins circulation as well.

Since the time of independence, India has seen a vast change in their coins. Back in 1950s, coins were made in Anna series where an image of crop was seen on the front. Soon that changed to the Decimal series in 1957, and later to Naya Paisa series which revolved up till 1957 to 1964. Then coins were made also made in different shapes and sizes for a brief period of time. Hence, Indian coins have been revamped the most in decades. Notably, RBI has the charge for making currency notes, but it is Finance Ministry who takes care of the coin circulations.

With every new phase in coins, fake ones have also changed their pattern. Hence, it becomes of utmost importance that the coin we carry is real and not fake ones. Also, as a responsible citizen, it becomes our duty to stay alert and vigilant in reporting fake coins to the government, as a fraudsters way of creating black money and terror financing. Fake coins can be detected with various methods. There comes weight which is different for every coins, their shapes,, size, pattern, letters and years. Here’s how you can detect the real coins.

Rs 5 (New) – This coin is upcoming one, with face bearing the Lion Capitol of Ashoka Pillar with the legend ‘Satyamev Jayate’ in Hindi inscribed below, flanked on the left periphery with the word ‘Bharat’ in Hindi and on the right periphery with the word “INDIA” in English. Rs 5 (existing) – The coin comes in Ferritic Stainless Steel (FSS) metal with weight of 6 grams, having a diameter of 23mm and in circular shape. Unlike old Rs 5 coin, there are no years and image made in new one, it just numerical 5 with Rupees word in english and hindi.

Rs 5 (old) – This one has a Lotus flower image with year, rupee symbol in hindi and numerical number in front. There is Lion Capital of Ashoka with सत्यमेव जयते below, while also ‘India and ‘भारत’ is mentioned at the back. In terms of body, the coin comes with cupro-nickel metal, weight 9 grams, diameter 23mm and circular shape. 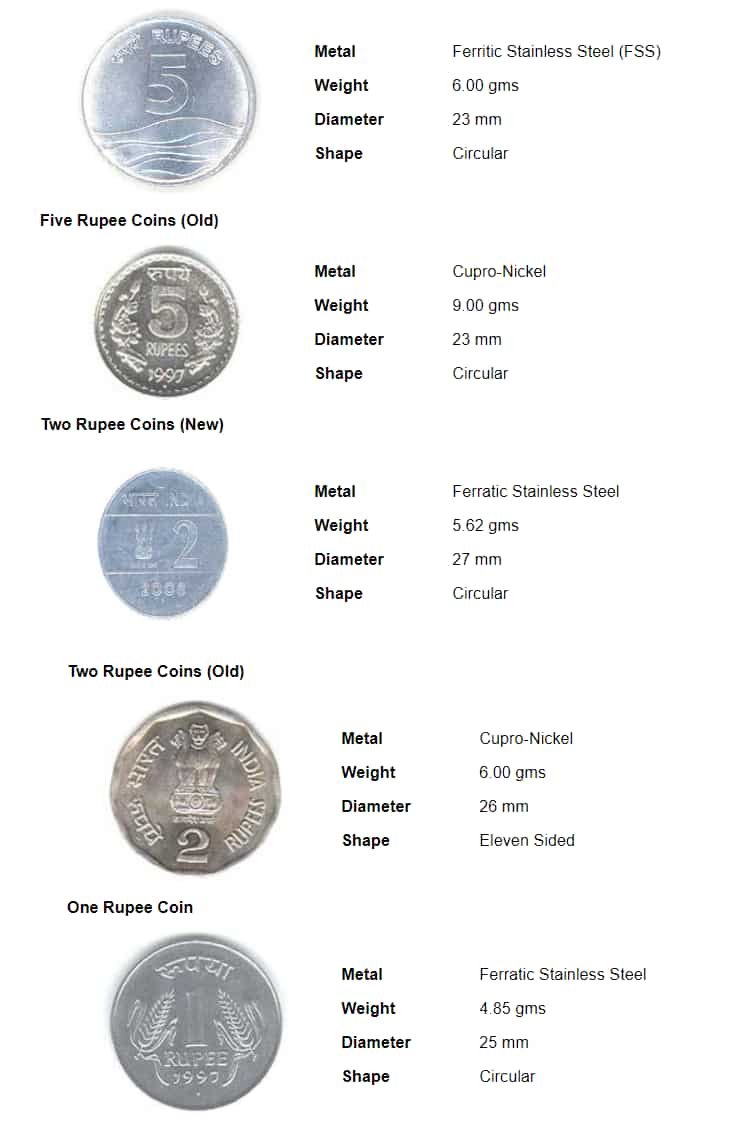 Rs 2 (new) – Upcoming Rs 2 will be similar like new Rs 5 and Rs 10 coins. However, at the back, it will have denominational value “2” in the international numerals. The Rupee symbol shall be shown above the denominational value. The top right and bottom right peripheries shall bear the word ‘Do rupaye’ in Hindi and “TWO RUPEES” in English.The year of minting in international numerals shall be shown on centre of left periphery of the coin.

Rs 2 (old) – The features of Rs 2 is similar like the old Rs 5. However, it comes in cupro-nickel with weight 6 grams, diameter 26mm and eleven sided shape.

Re 1 (new) – Having similar front like other new upcoming coins, however, at the back Re 1 will come with denominational value “1” in the international numerals. The design of grains depicting the agricultural dominance of the country is flanked on the left periphery of the coin. The top right and bottom right peripheries shall bear the word ‘Ek Rupaya’ in Hindi and “ONE RUPEE” in English. The year of minting in international numerals shall be shown on centre of left periphery of the coin.

Re 1 (old) – The back of Re 1 is same like old Rs 2 and Rs 5, however, from front it bears anna mark, with Rupaiya in hindi and rupees in english language. Also numeral ‘1’ with the year is mentioned at the face.

Rs 10 (new) – From the back it will have denominational value “10” in the international numerals, having the Rupee symbol above the value. Design of grains depicting on the left periphery of the coin, while the top right and bottom right peripheries shall bear the word ‘das rupaye’ in Hindi and “TEN RUPEES” in English. The year of minting in international numerals shall be shown on centre of left periphery of the coin. 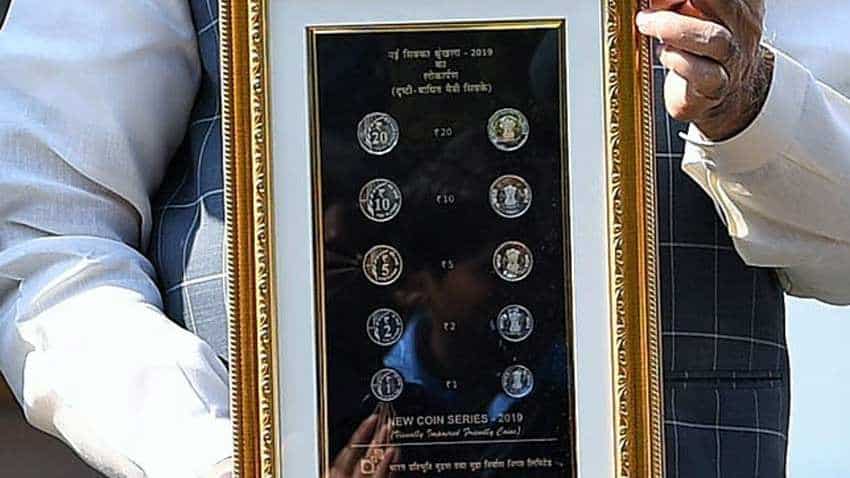 Rs 10 (old) – Notably, RBI has issued Rs 10 coins in 14 designs. However, the latest one bears at front Lion of Ashoka Pillar, Satyamev Jayate in hindi  flanked on the left periphery with the word “भारत” in Devnagri script and the word “INDIA” in English on right. The back comes with inscription “श्रीमद राजचंद्र” and “150 वीं जयंती” shall be written on upper left and lower left periphery of the coin in Devnagri script. The year in international numerals written on the left and right side of the portrait.

New Rs 20 – The face of the coin shall bear denominational value “20” in the international numerals with Rupee symbol shown above. Design of grains depicting the agricultural dominance of the country is flanked on the left periphery of the coin. The top right and bottom right peripheries shall bear the word ‘Bees Rupaye’ in Hindi and “TWENTY RUPEES” in English. The year of minting in international numerals shall be shown in the centre of the left periphery of the coin.

Now that you are aware of new and old coins, hence, if you ever have a doubt on the currency you hold compare them. You can always visit RBI website to know the features. However, what one must look is the placing of every word, image, numbers on their coin. If any shift is presented like the numeral are tilted or are not in order, then you must visit your nearest bank or RBI centre. Also, if there is any spelling mistake in the coin, there is a possibility it is fake.