Dish TV, Tata Sky, Airtel Digital TV Offers, Packs, Channel Price List, Plans: The DTH and broadcasting industry took a sudden shift in pricing and monthly plans under the new tariff regime in the country implemented by the Telecom Regulatory Authority of India (TRAI). The new rules require the consumer to select individual channels and pay for only those channels which they really see or want to see.

While the rules were aimed at empowering the consumer and decrease the monthly subscription cost, the unfamiliarity with the new rules resulted in some users ending up charged extra than what they were charged before.

DTH service providers like DishTV, Tata Sky, and Airtel Digital TV have come up with curated base and regional packs that users can choose as per their requirement instead of manually adding channels and calculating the monthly charge by adding channel charges and the network capacity fee (NCF). We are comparing the base plans and regional packs from DishTV, Tata Sky, and Airtel Digital TV along with the channel pricing, NFC charges and Broadcasters packs across the three DTH service providers.

For the DishTV consumers, 25 DD channels (FTA) are mandatory to add in a pack. While these channels do not cost, users are left with a choice to fill only 75 channels for the initial NCF charges of 100 channels. But DishTV is a good choice for those who want only FTA channels as the service provider offers all the FTA channels for NCF of Rs 130 (plus taxes).

For consumers having more than one TV connection under the same account in a home, Airtel Digital TV has reduced the NCF to Rs 80 (plus taxes) for the first 100 SD channels. Additional NCF of Rs 20 (plus taxes) is applicable for subsequent slots of 25 SD channels above 100 channels mark.

Tata Sky is offering Flexi Annual Plan, where users get one month of free subscription on the recharge of 12 months. Consumers will have the option to add or drop channels from their pack at any time.

DishTV has curated some packs for its subscribers to save them from the hassle of selecting individual channels. Its Swagat pack costs Rs 213 (plus taxes) and includes Hindi entertainment channels (like Sony, SAB, Bindass, &TV), Hindi movie channels (like Zee Cinema, UTV Movies, Max 2), Music channels, Kids channels along with Infotainment, Sports, Business and some other channels. DishTV also offers Add-on packs to the club with the base packs. In case you selected a pack that doesn’t have enough Kids channels, you can add the Kids pack priced at Rs 27 that includes channels like Cartoon Network, Disney, Pogo etc. Alternatively, you can make your base pack by only adding the Add-on packs. Starting with the Hindi Entertainment Add-on pack priced at Rs 113 can be ideal for Hindi users. It includes channels like &TV, Bindass, Colors, Sony, SAB and more.

Airtel Digital TV shows only the usual broadcasters pack and FTA bouquets at its website. There are no curated packs to be found at the website except at the new connection page. When users select to buy a new connection, they are presented with five options of packs to start their connection. The lowest pack, priced at Rs 127 (plus taxes), offers 81 channels. It includes 15 Hindi Entertainment channels, 12 Hindi Movies, 10 News channels, 10 Kids channels and others. However, the new connection page of the service provider shows a page with curated pack depending on your city. For instance, in Delhi, there is a Rs 139 pack (exclusive of NCF charges) which contains 92 channels, another pack that costs Rs 295 and contains 120 channels and so on.

On the website of Tata Sky, there is a long list of curated packs. It has listed Hindi Bachat pack at the top of its list that is priced at Rs 179 (inclusive of taxes, channel prices and NCF). The pack contains only SD channels including &TV, Aaj Tak, Zee Business, Sony Wah, Colors Cineplex, Sony Pal, Star Bharat and more. 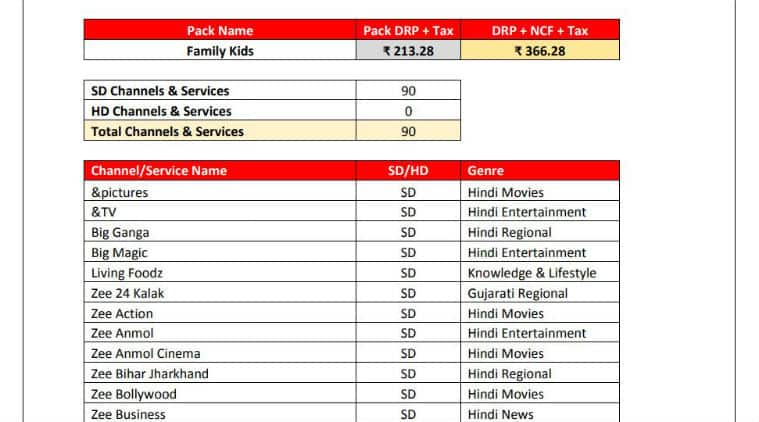 Hindi Smart pack of Tata Sky includes popular channels like Colors, MTV Beats, Zee TV, and others as well as other Hindi Bachat pack channels. It is priced at Rs 249 and has a total of 35 channels. The DTH service provider also has packs curated for the regional audience as well.

All the DTH service providers offer broadcasters packs that contain a specific selection of channels from a single broadcaster. For instance, Discovery offers a number of bouquet packs that include different sets of channels priced from Rs 7 to Rs 10. These broadcaster packs are priced equally across DishTV, Tata Sky, and Airtel Digital TV.

As per TRAI, under the new framework, consumers will have to pay a network capacity fee (NCF) of Rs 130 + Rs 23.4 GST (total Rs 153.4) for the first 100 channels in their base pack, which will be charged in addition to the individual channel pricing. For every 25 additional channels, consumers will be charged Rs 20 + Rs 3.60 GST extra (total Rs 23.6). Notably, HD channels are counted as two SD channels for the calculation of NCF.

The NCF pricing is the same across DishTV, Tata Sky, Airtel Digital TV, and other DTH service providers. However, there are some rules which are different regarding FTA channels and NCF.