CHENNAI: While mixers, grinders and juicers are mandated to carry a Bureau of Indian Standards (BIS) certification, two wheeler helmets are not.

“The government is planning to announce a rule to make ISI helmets mandatory and has introduced new BIS standards for two wheeler helmets, which were to be implemented from January 15 this year. It received an extension first up to April 15 and then till July 15. Currently there are 219 companies in India, out of which only nine have taken the required certification so far,” said Rajeev Kapur, president of the Two Wheeler Helmet Manufacturers Association and MD of Steelbird Helmets. 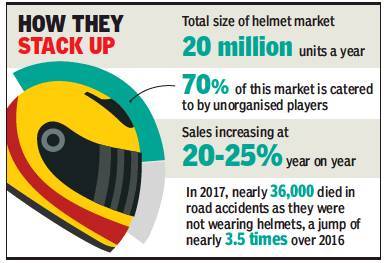 At present, Royal Enfield and Vespa are among the only handful of brands to comply with this rule.

The notification for bringing protective helmets under the compulsory certification of BIS Act, 2016 came on August 2, 2018. It’s called Helmets (Quality Control) Order 2018. However, it is still at draft stage and has not yet been notified. Helmet makers are gearing up for the new regulation by ramping up production capacity.

Market leader Steelbird, which has six plants including three in Baddi, Himachal Pradesh, is doubling capacity in all three from the current 18,000 helmets a day. “By 2020, we will have 43,000 helmets a day capacity,” said Kapur.

Apart from BIS specifications, the Tamil Nadu government is also enforcing an old Motor Vehicle rule that says two wheeler companies must also supply BIS compliant helmets to their customers. In a letter dated March 29, 2019, transport commissioner C Samayamoorthy requested all two wheeler manufacturers and dealers in Tamil Nadu, “to supply the helmet to the buyer at the time of purchase of new two wheeler”.

Now, a new regulation under consideration could soon mandate that quality of these ‘protective headgear’ be finally brought under the BIS Act. The objective is to make sure that helmets being used are of required quality, considering unorganised players account for 70% of 20 million units-a year helmet market, say manufacturers. Already the government has notified new BIS norms for two wheeler helmets for those in the organized sector who do not conform to BIS certification.