Kangana Ranaut, locked in a dramatic face-off with Maharashtra’s ruling Shiv Sena, has been compared to freedom fighter Bhagat Singh by actor Vishal. In a post on Twitter, he said the actor had set an example for people to “speak against the government” when something is not right.

“Hats off to your guts, you have never thought twice to voice out what is right and what is wrong. It wasn’t your personal issue, but even then facing the wrath of the government, you stayed strong which makes it a very big example. It is something similar to what Bhagat Singh did in the 1920s,” Vishal said in his post.

“This will set an example for people to speak against the government when something is not right and not necessarily being a celebrity but also as a common man (sic). Kudos to you, I bow to you,” said Vishal, adding in boldface “Freedom of Speech (Article 19)”. 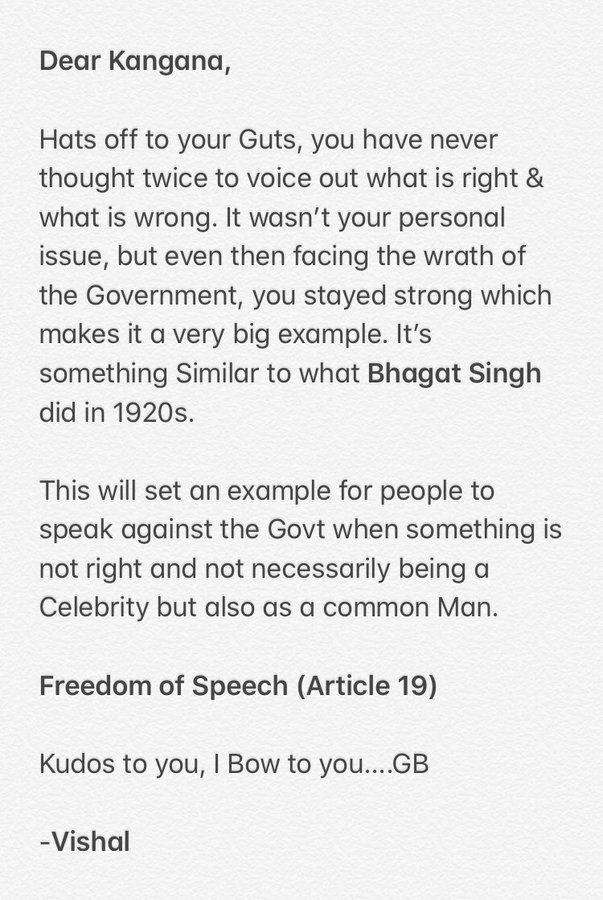 The Tamil action star, who was very vocal against the Jallikattu bull-taming festival, is known for his strong political views and is said to be close to actor-politician Kamal Haasan.

On Wednesday, Kangana Ranaut’s office was partly demolished by Mumbai’s civic body BMC over what it called “illegal structures”, a move that raised questions about timing. The outspoken actor has been sparring with the Shiv Sena, which rules Maharashtra and also controls the civic body, over the Sushant Singh Rajput case. Her comment that “Mumbai feels like PoK” enraged Sena leaders, who said she should not return to the city. The fight escalated as the central government gave her armed security; the Sena accused the BJP of backing Kangana Ranaut.

Yesterday, Kangana Ranaut hit out at Maharashtra Chief Minister Uddhav Thackeray in a video and accused his Shiv Sena of vendetta over her criticism of the Mumbai police’s handling of the Sushant Singh Rajput investigations.

The Bombay High Court stopped the demolition, saying the BMC’s conduct was “deplorable” and it seemed to have “woken up from its slumber all of a sudden.”