Here’s finally some ‘good news’ for Flipkart, Amazon and other e-tailers

Here’s finally some ‘good news’ for Flipkart, Amazon and other e-tailers

NEW DELHI: The government has ruled out the possibility of a regulator for the e-commerce sector as it prepares to finalise a national policy on e-commerce. Commerce and industry minister Piyush Goyal has told small traders and retailers to explore ways to benefit from e-commerce platforms but turned down their demand for a regulator for the sector.

“Traders wanted a regulator or separate law for the e-commerce sector but the minister said that will not solve their problems,” said an official aware of the details of the meeting that Goyal had with representatives of small traders on Wednesday.

The Department for Promotion of Industry and Internal Trade (DPIIT) has made public a draft national e-commerce policy in which it has proposed regulating cross-border data flows, locating computing facilities within the country to ensure job creation and setting up a dedicated ‘data authority’ for issues related to sharing of community data. It has stated that the data generated in the country is a national asset, and citizens and the government have a sovereign right over it. However, it does not call for a regulator, unlike a draft policy released last year by the commerce department which did. 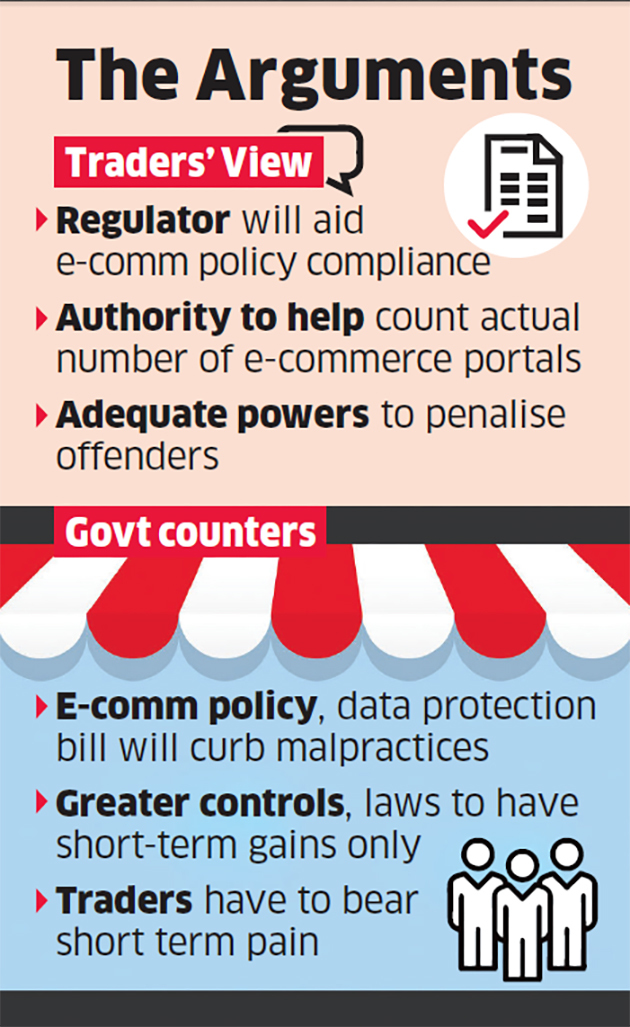 The Confederation of All India Traders (CAIT), which participated in the meeting had proposed a regulatory mechanism to monitor the compliance of the policy.

“The government has very little knowledge about the actual numbers of e commerce portals working in the country since their registration with any authority is not mandatory,” CAIT said in a statement.

Representatives of the associations of kirana stores, traders and retailers discussed the need for a level playing field and the impact of anti-competitive practices like predatory pricing and other discriminatory methods that are being faced by them from foreign competition “The government is working on a law on data and a policy for the ecommerce sector is also underway which will look at any malpractices,” the official added.

Goyal had met representatives of Indian and global e-commerce and information technology companies on Monday and asked them to share their comments on the policy in ten days. He also suggested another meeting with them in case their lawyers sought.

“Minister explained that by bringing in greater controls through rules and laws will only help up to a certain point, but for long term gain, short term pain will have to be borne and India cannot remain in isolation and will have to be part of the global value chain in order to become a $5 trillion economy,” the ministry said in a statement.

Goyal further said that the aspect of data in the law is being addressed by the Ministry of Electronics and Information Technology (MeitY) and asked the representatives of associations of kirana stores, traders and retailers to send all suggestions for the draft e-commerce policy in the next five days.