The first solar eclipse of the year will fall on June 21. Scientifically, a solar eclipse occurs when the moon gets between the Earth and the sun, casting a shadow over the Earth. Solar eclipse in India is popularly known as surya grahan.

This solar eclipse will be unique in the way that the moon will cover the sun from the centre, leaving the outer rim visible – a phenomenon known as the annular solar eclipse, which also leads to the creation of the ring of fire.

Since this will be a rare phenomenon, many astronomy enthusiasts must be waiting to see it live and to capture it. But ones without proper professional equipment must be cautious as during the solar eclipse a lot of harmful rays are emitted that might damage one’s sight if viewed with naked eyes.

As per the Press Information Bureau of the Government of India, the solar eclipse can be viewed partially in different Indian cities.

The PIB in its press release said that, “Obscuration of the sun by the moon at the time of greatest phase of the partial eclipse will be around 94 percent in Delhi, 80 percent in Guwahati, 78 percent in Patna, 75 percent in Silchar, 66 percent in Kolkata, 62 percent in Mumbai, 37 percent in Bangalore, 34 percent in Chennai, 28 percent in Port Blair.” 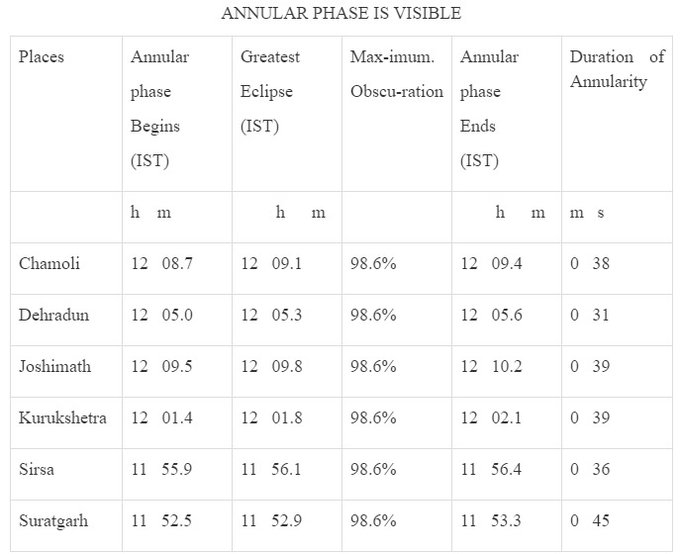 How to Watch the Solar Eclipse Safely

The exposure of bare eyes to the light can damage the eyes permanently and even become a cause of blindness. A protective eyeglass, binoculars, box projector, telescope or an X-Ray film should be used to witness the solar eclipse safely. You can also watch the live streaming of solar eclipse on various channels on the TV or YouTube.

Tips to Capture the Solar Eclipse by Phone or Camera

Many people today are quite enthusiastic about photography and wish to capture rare moments like these. The following tips can help one capture a clear view of the eclipse, using only their phone.

When is the Next Solar Eclipse?

The year 2020 will witness a total of six eclipses out of which only two solar eclipses would be taking place this year. The first solar eclipse will occur on June 21 and the next one is expected to happen on December 14. However, unlike the eclipse on June 21, the eclipse in December might not be visible in Asian countries. According to some reports, the next solar eclipse will be visible from South America, Pacific, Atlantic, and parts of the Indian Ocean, Antarctica, and Africa.