“The 2nd instalment of ex-gratia announced for women Jan Dhan Yojana account holders under the PMGKY package will be disbursed as per the following schedule. Beneficiaries can withdraw the amount from branches, ATMs or CSPs.” SBI tweeted. 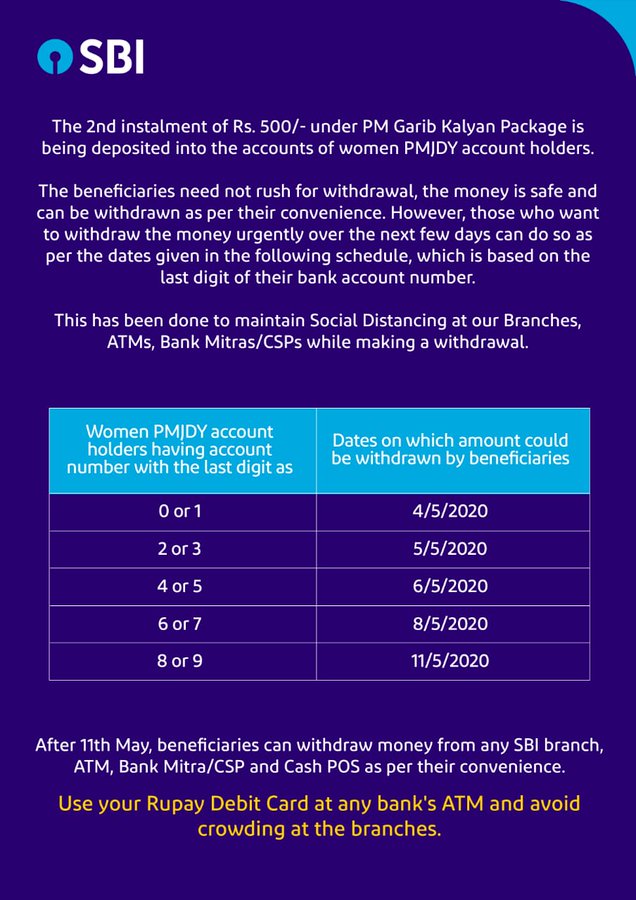 The bank further said that the beneficiaries need not rush for withdrawal, the money is safe and can be withdrawn as per their convenience. However,those who want to withdraw the money urgently over the next few days can do so as per the dates given in the following schedule, which is based on the last digit of the bank account number.

As per the schedule, women account holders under the Pradhan Mantri Jan Dhan Yojana (PMJDY) having account number with last digit as 0 and 1 will get the money in their account on May 4, while accounts ending with 2 or 3 can approach the bank on May 5.

On May 6, beneficiaries with account numbers ending with 4 or 5 can collect their money, while accounts ending with 6 or 7 may withdraw on May 8.

The last tranche would be remitted on May 11 for account numbers ending with 8 or 9, the tweet said.

The transfer has been staggered over a period of five days to maintain social distancing at bank branches, ATMs, Bank Mitras/CSPs while making a withdrawal, SBI said.

SBI has also requested beneficiaries to use neighbourhood ATMs, bank Mitras for making cash withdrawals as far as possible and not crowd the branches. At present there are no charges for withdrawing money at any banks ATM.

During April as many as 20.05 crore Women Jan Dhan account holders received ₹500 each in their accounts as the first installment.