Once again, Google is being bashed for letting malicious apps slip into the Play Store.

The marketplace, according to a recent Trend Micro report, hosted more than two dozen beauty camera apps capable of carrying out malicious activities.

Some of these programs were downloaded more than a million times and even stole photos of their targets.

Here’s all about them. 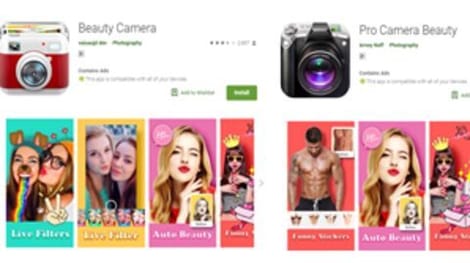 A bit about these apps

The apps looked like any other editing program designed to enhance selfies but actually performed malicious tasks in the background.

What these apps did in background?

Most of the flagged apps worked normally but displayed full-screen ads as and when the infected device was unlocked.

In these adverts, some apps displayed pornographic content for a certain payment, while others tried phishing users into giving away their personal details.

They displayed contest messages, redirecting users to a page where they had to enter their personal credentials to win fancy prizes.

How some apps stole photos?

The same batch also included some photo filter apps that prompted the user to upload their photos to edit them. However, instead of returning the enhanced images, these programs gave a fake update prompt and stole the images originally uploaded to their servers. Also, they made uninstallation nearly impossible

The apps in question also hid from the app list, making sure that user isn’t able to connect them with the intrusive ads or remove them for that matter.

This raises major concerns about Android security, especially considering the fact that 11 of these apps had been downloaded more than 100,000 times, while three went past a million download mark.

However, Google has now taken the apps down

When the apps were flagged, Google came to the rescue and took them down.

However, this doesn’t solve the problem of malicious programs slipping into the store, something that has been plaguing the Play Store for a long while.

The search giant has been bolstering its app-screening methods, but clearly, it needs to do a lot more in this area.