Watch out! Your AC can start a massive fire

Watch out! Your AC can start a massive fire

It is supposed to provide respite from scorching heat and be a source for ‘creature comfort’. But in the absence of regular maintenance and proper servicing, your air-conditioner can end up triggering a deadly blaze.

On August 17, a major fire broke out at the teaching block of the All India Institute of Medical Sciences (AIIMS). It took more than six hours and 22 fire tenders to control the fire. Officials said ACs installed on different floors acted as a catalyst in spreading the blaze.

Six people, including two children, died in a fire that broke out at a four-storey residential building in South-East Delhi’s Zakir Nagar on August 5. Fire department officials said that it was ignited by a shortcircuit malfunction in one of the many airconditioners installed in the building.

On May 6 last year, a 10-year-old boy and his eight-year-old sister died after their house, a four-storey building in North West Delhi’s Adarsh Nagar, caught fire owing to a spark in the AC installed in the room.

Says Delhi Fire Chief Atul Garg: “We have found that more than 15 per cent cases of fire in Delhi start from air-conditioners.” Not just residential complexes, even government offices and commercial establishments have caught fire owing to overheating of ACs. 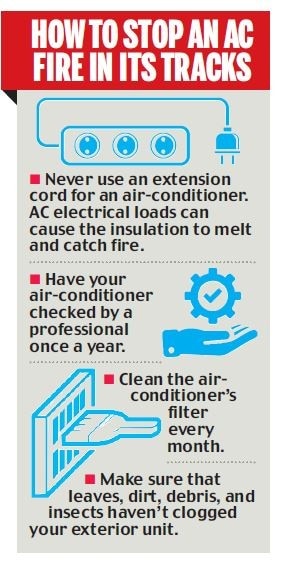 On August 27, a conference room and many documents of the Delhi Commission for Women were gutted in Central Delhi’s Vikas Bhawan because of a fire, which started from an air-conditioner.

Fires due to air-conditioners are caused by short-circuit in the wiring which causes the appliance to overheat and subsequently ignite. Frequent power surges or fluctuation in voltage can also overheat AC units, warn fire department officials.

Garg blames poor maintenance for fires starting from an air-conditioner. “ACs are usually serviced once in a year, but are used 24×7 for at least eight to nine months. Wiring, capacity and maintenance of ACs are the reasons behind such fires,” he said.

Fires can break out due to shortcircuit in any electrical appliance, said experts. But fires sparked by air-conditioners, they say, are more frequent since they consume high power and need regular maintenance.

Dinesh Pal, who runs an AC service centre in Delhi, said, “ACs and heaters consume a lot of power. During summers, these units keep running non-stop at really low temperatures, which puts a lot of load on the compressor and wiring. When it gets overloaded, it causes a spark that leads to fire.” Pal recommends that ACs not be powered through extension plugs since it may lead to short-circuit.

Jagjit Singh Walia, a former electrical expert with the Central Public Works Department, told Mail Today that government offices are tinderboxes as most of the buildings do not have centralised AC plants.

“Most of the government buildings in Delhi are very old and so is the electrical wiring. There are many unauthorised ACs installed in these buildings which are connected to computer plugs or extension wires, making these extremely dangerous,” explained Walia.

The violation of fire safety norms led to the death of 17 people who were charred in a fire at Hotel Arpit Palace in Karol Bagh on February 12 this year. As per the report, the fire was triggered by a short circuit in an air-conditioner on the second floor of the building.

WAYS TO DOUSE IT

Many government officials acknowledged the deadly risk posed by the maze of ACs installed in buildings. “Depending upon the demand load and capacity, ACs are upgraded from time to time. We keep checking substations to track any overload. Some safety features have been adopted at government offices such as Vigyan Bhawan and Nirman Bhawan which switch off the compressor as soon the air-conditioner overheats,” said Ujjwal Kumar, Chief Engineer, CPWD.

Kumar says Shastri Bhawan is particularly prone to fire as it is overcrowded. Fire safety experts say ACs, unlike other electric appliances, require a lot of power to run.

“The recent fires in Delhi have exposed the poor safety measures in big institutions. This can be attributed to human negligence which can be rectified by adopting the latest technology and regular maintenance,” says Neeraj Sehgal, chairman, Fire and Security Association of India.