WhatsApp lets you listen to your voice message before sending it

WhatsApp lets you listen to your voice message before sending it 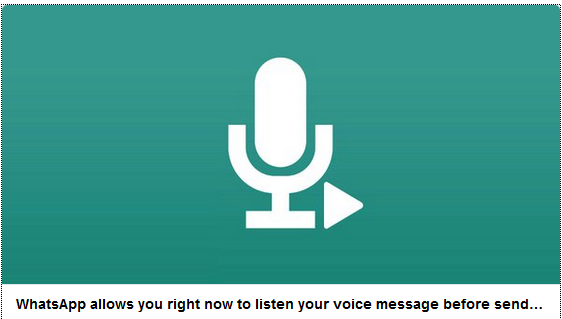 WhatsApp is likely to have brought a new feature that will let you listen to the voice messages before sending them to your contacts. According to WABetaInfo that is a WhatsApp fan site, this feature is available in the iOS version of the application and we can expect the same to be rolled out to the Android version as well in the coming weeks. Having said that, the ability to listen to voice notes before sending them will definitely improve the user experience.

The blog post on the fan site shows that this ability is seen in the iOS version of WhatsApp with the version number 2.18.10. Previously, WhatsApp came up with a feature that will let users just click on the voice message button instead of having it pressed continuously to record a message. The messaging platform appears to move in the same direction and improve the experience of sending voice messages to their contacts.

WhatsApp to save a copy of the message

WhatsApp is on a rollout spree

Lately, WhatsApp has been rolling out several new features and updates to enhance the overall user experience. Some of the new features include the ability to share Instagram Stories as Status messages, in-built Stickers option as in Facebook, switch between voice and video calls, and a lot more.